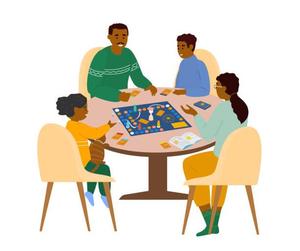 Looking for some games to play during the holiday season? Check out some of our suggestions!


Holiday Movie Night - Pop some popcorn, bake up some brownies, and make some hot chocolate for a Christmas movie night! Don’t forget to wear your favorite holiday pajamas!

Piñatas aren't just for kids' birthday parties, you know! Dressed up as ornaments, these candy-filled orbs are sure to delight kids young and old at Christmastime.


Oven Mitts Challenge - If it seems like your family unwraps their gifts a little too fast, put their skills to the test with this challenge, which rewards the first person to unwrap a present while wearing oven mitts.


Rudolph Race – (Red poms, spoons, vaseline, and Rudolph poster) Give each player a red pom pom and a spoonful of Vaseline. Players have to race to be the first person to put a red pom pom on Rudolph’s nose (make sure to put a bit of Vaseline on his nose as well) on the other side of the room.

To play, players must dip their nose into the spoonful of Vaseline then get the red pom pom to stick to the Vaseline on their nose. Once the red pom is on their nose, they must move across the room and stick it to Rudolph’s nose.

The catch? They can’t use their hands at any time.


Build a Snowman - Bring the outdoor fun inside with this silly game. The first group to "build" their snowman wins! The host tells the players to place their paper plate on their head.

Have everyone place their paper plate on their head.  Holding the plate in one hand and the marker in the other hand.  Silly I know, but this step ensures no one is peeking, and it makes it just a little bit harder.  Plus, giggling is half the reason why you’re playing this game…right?


Sugar Plums Dancing - Give each team a list of Christmas songs that everyone other than one person on the team can see. Teams must race to be the first to get their “guesser” to guess the title of all of the Christmas song titles on their list.

Teams can work together like in reverse charades to act out the song title but no words, no singing, and no sign language. It’s speed charades.

You can either do the first person to get through the entire list or first team to guess like five of the songs on the list.